Its been almost ten years since Satoshi Nakamoto first introduced Blockchain technology to the world in his 2008 Bitcoin Whitepaper. Since that time, these revolutionary networks have gained popularity in both the corporate and governmental sectors. This growth is easily explained when you consider that blockchain technology provides the world with some unique advantages that were previously unimaginable. Consequently, today, you can find blockchain technology in nearly every sector of the global economy.

What is Blockchain Technology?
A blockchain is a network of computers that share a distributed ledger across all network participants (nodes). This strategy is far different than say, fiat currencies that originate from a centralized authority figure. Importantly, this ledger keeps an unbroken chain of transactions since the birth of the network. This “chain” of transactions grows larger as new “blocks” of transactions are approved and added to it.

In order to approve new transactions, each node works together with others to validate new blocks. Additionally, the nodes also validate the current state of the entire blockchain. In order for a new block of transactions to be added to the blockchain, they must receive approval from 51% of the network’s nodes. Nodes are also referred to as miners. In this manner, blockchain networks are decentralized networks that provide unmatched security to the world of digital assets.

Decentralization is an important aspect of blockchain technology because it makes these revolutionary ledgers immutable and unalterable. In fact, since there is no centralized attack vector, hacking a blockchain is nearly impossible. The larger the blockchain network, the more secure the data on it remains.

For example, let’s look at the world’s largest blockchain, Bitcoin. Currently, the Bitcoin blockchain has over 10,000 active nodes located across the globe. This distribution means that in order for an attacker to alter even just one tiny piece of information on the blockchain, they would need to successfully hack 5,000+ computers at once.

While this task may not be impossible for the quantum computers of the future, it’s so unprofitable that it makes no sense to even attempt such a monumental task. Additionally, on top of successfully hacking 5000+ computers at once, an attacker would also need a supercomputer to recalculate the new blockchain transactions in time to introduce them into the network. It would literally be more affordable to create a new cryptocurrency from scratch.

The Proof-of-Work consensus mechanism was revolutionary to the world of cryptography when it was first introduced years prior by Adam Back in his Hashcash whitepaper. In the concept, Back describes the integration of a mathematical equation to the network’s security protocols. In this way, every computer can show “proof” of their work securing the network.

It’s important to understand that nodes receive a reward for their mining efforts. These rewards adjust automatically depending on the network’s difficulty and value. In the case of Bitcoin, miners originally received 50 Bitcoin for their efforts. Today, this seems like fortune, but back in 2009, Bitcoin was only worth pennies. As the value of the token rises and the network goes, the mining rewards shrink. Today, Bitcoin miners receive 6.5 BTC if they add the next block to the chain.

Notably, every node validates and secures the blockchain, but only one gets to add the next block of transactions to the network. To determine who the next miner is that gets to add this block, every computer competes in a mathematical race to figure out the PoW equation. In the case of Bitcoin, the equation is known as SHA-256. Importantly, the first SHA algorithm dates back to Hashcash. This early version of the equation was known as SHA-1. 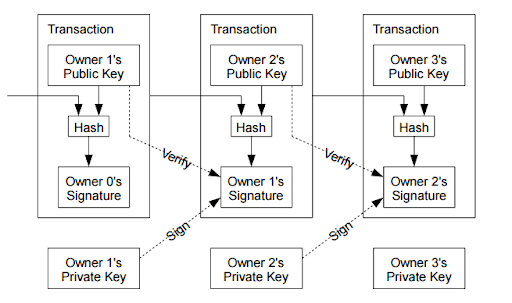 Notably, the SHA-256 equation is so difficult that it’s easier and more efficient for your computer to just make random guesses rather than attempting to figure out the equation directly. The answer to the equation must begin with a predetermined amount of 0s. In the Bitcoin blockchain, the equation’s answer must start with four zeros. However, if the network’s congestion rises, so does the difficulty of these equations. This difficulty adjusts by the addition of another zero at the beginning of the required SHA-256 answer.

Similarly to traditional commodities such as gold, there are costs that are associated with the creation and introduction of these digital assets into the market. These random guesses utilize intense computational power. This power equates to real-world costs such as electricity bills. Studies have shown that securing the Bitcoin network can use more electricity than required by entire countries. Luckily, over 80% of Bitcoin’s power consumption comes from renewable sources such as solar or hydroelectric.  This cost of mining also adds measurable value to each Bitcoin.

As Bitcoin began to gain in profitability,  its network’s computing power expanded significantly. In the beginning, nodes, also known as miners, could mine for Bitcoin using nothing more than your home PC. Eventually, miners realized that graphic cards were far better at the repetitive guessing required to figure out the SHA-256 algorithm. This led to a computational race in the market.

Eventually, large blockchain firms such as Bitmain introduced Application Specific Integrated Circuit (ASIC) miners into the equation. These purpose-built miners were thousands of times more efficient at guessing the SHA-256 algorithm than the GPUs and CPUs before them. Consequently, their introduction created a scenario in which the average miner now needed to invest thousands in mining equipment to stay relevant.

Luckily, some creative minds in the field began to think of ways to level the playing field out again. They developed “mining pools.” A mining pool is a network of miners that all share computational power for the common goal of mining blockchain transactions. Importantly, mining pool participants receive a percentage of the reward based on their contributions to the network’s overall hash (computational power).

Importantly, over the last three years, there has been a push to move away from power-hungry consensus mechanisms such as PoW. This desire to secure blockchains in a more efficient manner has led to the development of some truly unique consensus mechanisms in the sector.

The Proof-of-Stake mechanism does away with the difficult mathematical algorithms and instead utilizes a more psychological approach to securing the network. In a PoS blockchain, users don’t need to compete mathematically to add the next block to the blockchain. Instead, PoS users “stake” their coins via network wallets to secure the network. The way staking works is simple.

Keeping a certain amount of coins in your wallet allows you to participate in transaction validations. The more coins you stake, the more likely the chances are you get to add the next block of transactions to the network. In most PoS systems, a miner from those with the most tokens staked at the time receives the chance to add the blocks.

The advantages of a PoS consensus mechanism are immediately evident. For one, you don’t need to pour tons of resources into your network to keep it safe. Additionally, since nodes are chosen based on their amount of staked coins, there is never a scenario in which a node gains anything from validating incorrect transactions. Basically, a hacker would have to fully invest in the cryptocurrency prior to attacking the network. In this way, PoS systems create a huge deterrent to attackers.

The Future of Blockchain Technology

Blockchain logistical systems are more efficient and cost-effective to operate than traditional paper-based models. In fact, the immutable and unalterable nature of blockchain tech makes it ideally suited to logistical tasks. Soon, you may be able to ascertain much more information regarding the creation and delivery of your products thanks to these new-age systems emerging.

Blockchain technology has also altered the way in which businesses raise funds. In a traditional corporate crowdfunding strategy such as an IPO, companies must balance between cost-effectiveness and participation. The inability to process smaller transactions meant that for the longest time, companies had to turn away potential investors. Nowadays, blockchain technology enables businesses to easily automate these procedures via smart contracts.

Smart Contracts feature preprogrammed protocols that execute when they receive a certain amount of cryptocurrency sent to their address. These contracts live on the blockchain and enable remarkable functionality. For example, in the case of fundraising, a smart contract can automate processes such as the approval of investors and the distribution of funds.

You can expect to see further expansion of the blockchain sector in the coming months as more governments and institutions explore its benefits. For now, the blockchain revolution is well underway.