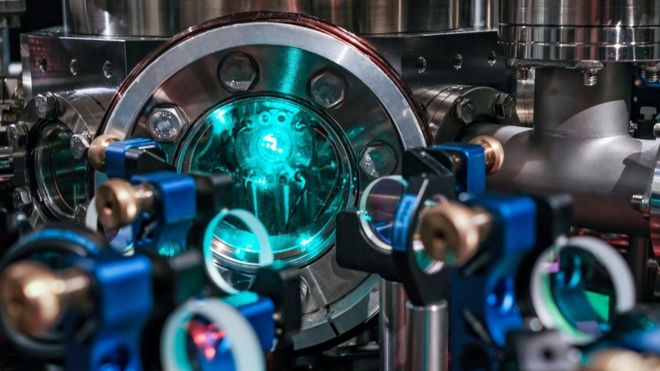 The coldest computers in the world

Imagine the US is under attack. An enemy aircraft, loaded with warheads, is heading towards the coast, dipping in and out of radar. Fighter jets have been scrambled and there’s a frantic effort to pinpoint the target.

But the nation’s best defence is not an aircraft carrier or a missile system. It’s a box of incredibly cold atoms.

“Use the quantum computer,” yells a general. The atoms inside the computer can solve complex problems and, almost instantly, spit out an instruction for how to reconfigure a radar array so that the enemy aircraft can be tracked and targeted.

One firm already getting to grips with a scenario like this is ColdQuanta. It recently signed a contract with US defence research agency Darpa to build a quantum computer that can rapidly work out how best to reposition radar equipment in the event of a defence system partially failing.

The project relies on being able to gather together enough atoms as qubits – the building blocks of a quantum computer, which allow it to perform calculations.

To do this, the atoms have to be extremely cold, making such computers the coldest in the world.

Quantum computing is much-hyped but the technology is very much in its infancy. Firms are just beginning to build systems that they claim will one day outperform traditional, digital computers at certain useful tasks.

“What we’re asked to do over the next 40 months is be able to have a machine that has thousands of qubits to solve a real-world defence-related problem and the one that we’re working on is a version of this radar coverage problem,” explains Bo Ewald, chief executive of ColdQuanta, based in Colorado.

The example above is an optimisation problem, a scenario to which there may be thousands or millions of possible solutions. The key is to choose the best one.

Besides military applications, quantum computers could have uses in drug design, investment strategies, encryption-cracking and complex scheduling problems for large fleets of vehicles.

Mr Ewald says this is where quantum computers will have their initial impact – in finding optimal solutions to problems that would take existing computers, even the fastest supercomputers, many hours or days to resolve.

There are various types of quantum computer in development but the approach using ultra-cold neutral atoms as qubits is unusual – it’s different from the superconducting quantum computers being developed by big firms such as IBM and Google, or other projects that use charged atoms, also known as ions, instead.

Superconducting quantum computers don’t use individual atoms as qubits, and while those systems rely on low temperatures they are not as low as those needed for ColdQuanta’s neutral atoms.

“The superconducting folks are running at millikelvin… we’re down to microkelvin,” he explains, proudly.

Kelvin is a measurement of temperature. Zero kelvin, absolute zero (-273.15C) is the coldest anything could ever be.

And while millikelvin is cold, at 0.001 kelvin, ColdQuanta’s microkelvin atoms are much colder – at roughly 0.000001 kelvin. Both are significantly colder, indeed, than anywhere we know about in the natural universe.

In ColdQuanta’s case rubidium atoms are gathered together inside a vacuum within a tiny, hexagonal or rectangular glass box, about an inch wide, an inch deep and two inches high. The atoms are held aloft purely by lasers.

But why is temperature so important? Prof Andrew Daley at the University of Strathclyde and his colleagues are also working on ultra-cold neutral atom quantum computers. He says it is crucial to be able to manipulate the atoms and hold them in place.

Shining lasers onto the atoms prompts them to release some energy and slow down. That makes it possible to hold them almost perfectly still, which is the real point here. They’re not cold in the sense that you or I would conceive of cold – rather, they are just greatly slowed down.

Once you’ve got your ducks – atoms – in a row, you can arrange them just how you want, says Prof Daley. This fine-grained control over the atoms means they can be placed in two- or three-dimensional formations, packed near to one another at the heart of a quantum computer. That’s important because with every additional atom, the computer’s capabilities are doubled.

Prodding each neutral atom with yet another laser excites them, greatly increasing their size. These adjustments encode information or link the atoms together via a weird phenomenon called entanglement. Now you have a collection of qubits functioning together as a system that you can tweak in order to represent a mathematical model or problem of some kind.

Amazingly, the user of a quantum computer could in theory programme this system to simulate a huge number of possibilities at once. It’s not quite like a traditional computer processing lots of calculations in parallel, it’s stranger and less predictable than that and getting a useful answer out at the end is tricky.

“What you want is that the quantum state at the end represents the answer to the problem you’re trying to solve,” says Jonathan Pritchard, Prof Daley’s colleague at Strathclyde. The quantum computer should end up favouring a particular state, or, one particular answer to a problem.

For the right problem, it could get us a lot closer to an optimal answer, both more quickly and more efficiently, than a traditional computer.

“We are really still waiting for a demonstration of a computing task where we can prove that these machines have done something beyond what you can do on a classical computer – for something that’s actually useful,” says Prof Daley.

French company Pasqal is building a prototype system, based on similar principles as ColdQuanta.

Pasqal’s system is for energy giant EDF, which, if it works, will come up with super-efficient schedules for charging electric vehicles. Specifically, the goal is to minimise the total time needed to complete charging for all vehicles while also prioritising certain more important vehicles over others.

This sort of problem could be tackled by a traditional computer, admits Christophe Jurczak, chairman, but he argues a quantum system will end up being significantly quicker, doing it in an hour rather than 24 hours for example.

“It doesn’t seem that big but if you want to update your strategy every hour, that’s a big difference,” he says. And it might use 100 times less electricity than a supercomputer in the process.

At the moment, all of this remains to be demonstrated for real. But there are signs that in the next few years – faster than some expected – we will find out just how useful this breed of bewilderingly cold computer really is.