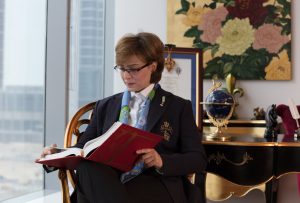 As George Bernard Shaw once stated that, “There are passions far more exciting than the physical ones…’intellectual passion, mathematical passion, passion for discovery and exploration: the all mightiest of all passions”.  Dr. Manahel confirms this status, she possess a deep passion for science and quantum physics, which she has explored and studied thoroughly, resulting in mind blowing researches, which adds value to modern science.  She is one of the rare Arab women to have entered the field of Quantum Mathematics, and currently her research has been adopted by several universities for development purposes.  Her thesis in the field of quantum mathematics is to develop new mathematical equations to calculate distances of universe and micro elements. She is the only Arab woman and one of the few in the world to enter into the discipline of science using quantum mathematical theories. The thesis has been accepted by the boards of several Universities as an exception due to the genuineness of the subject.  In case of success, it will be a revolution expansion of the science of quantum mathematics together with quantum physics.  This gives Dr. Manahel Thabet her second Doctorate degree.

In the year 2010 and until this date, Dr. Thabet is assigned as the President of  “IQuestion”, the High IQ society 98% Percentile Rarity Intelligence Rate and the Vice President of  “WIN” (World Intelligence Network), undertaking more than 50,000 high IQ members from all over the world. Dr. Thabet holds one of the highest IQ in the Cattel IQ test and she was ranked in the world genius directory at 168 which puts her in the 0.01 in the total population.

Dr. Thabet is also an active member of several organizations such as MENSA International, Young Arab Leaders and the International Association of Financial Engineers.  She is also a Columnist and an Economic Researcher in many leading financial publications.

Dr. Thabet is also involved in many humanitarian efforts, locally and internationally. She had been assigned as a Good Will Ambassador for a fund raising organization of Prince Albert II of Monaco in 2010 to raise wealth for charity.  In addition, Dr. Thabet had earned many International awards for her charity and fund raising attempts, such as “Woman of the Year Award” by “Woman Federation For World Peace” and the “Excellence of Global International Environmental and Humanitarian Award” given for the outstanding efforts in undertaking environmental and humanitarian support in the year 2000.

In 2010 she was selected to be the Arab Inspirational Woman of the Year 2010 by La Official,   She was also selected to be the primary Judge for the prestigious Arab Woman Awards since 2010 till now. In 2013 and 2014 Dr. Thabet was ranked amongst the most influential 100 Arab Women by CEO magazine and also among the most powerful 500 Arabs in the World by Arabian Business.

In 2013, she was recognized by the “World Genius Directory” for the Title “Genius of the Year 2013” representing ASIA, and to be the only Arab and the only woman to earn such a prestigious Title. She is also the winner of the Middle East Achievement Awards in Science 2013.

Dr Thabet’s Name was engraved in the wall of honor of the Royal Society of Science in UK in recognition to her massive role promoting human intelligence. Dr. Thabet won the prestigious Avicenna Award after the inventor of Mind Mapping and she was recognized as the youngest recipient of this Award.