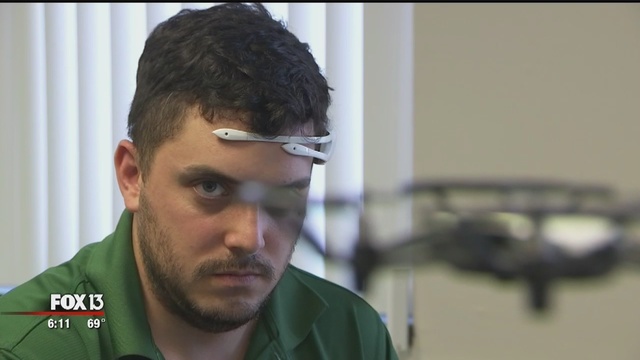 TAMPA (FOX 13) – USF graduate student Dante Tezza is pretty good at flying a drone. He literally uses his head. He controls the drone with his brain.

“These are the sensors,” he says, showing us a round, plastic circle that fits on his head as he flies the small drone in a lab.

His brainwaves are transmitted to the drone. When he imagines walking, the drone flies forward. When he thinks of sitting down, the drone lands. He says you can learn to make it fly in a day.

“But to master it, it may take you weeks or even months of training,” says Tezza.

He and fellow computer science and engineering graduate student Sarah Garcia are working on their PhDs with BCI, or brain-computer interface.

They’re searching for some USF students to participate in the first International Brain Controlled Drone Races.

“The students who get the fastest time will get to compete in our actual event in February,” says Garcia.

It’s being held at the Yuengling Center on February 9.

What does it take to be the fastest brain drone flyer?

“That’s good research question,” smiles Tezza. “We don’t have an answer yet.”

It could be in the pilot’s ability to focus on how the sensors make contact with an individual’s brain. They believe drones are just the beginning of brain-controlled technology that could do everything from opening doors to mowing lawns to helping disabled people.

The power of the brain could be the greatest equalizer.

“It doesn’t matter if you are a man or a woman, or if you’re in a wheelchair. All that matters is how much you can focus your brain waves,” says Tezza.

They will soon advertise how USF students can come to their lab and try out for the 16-member brain drone team on a simulator game they’ve designed.

They say watch social media for details on  when the try-outs will happen. In the meantime, think drones and practice focusing your brain.